My son just turned five years old. He walks and talks and takes care of his basic needs. Heck, he even vacuums and runs the dishwasher! Then again, he’s not confident enough physically to ride a bicycle or climb a tree. He’s definitely not an infant, but he is still developing physical independence.

In my last post I introduced the concept of the Four Planes of Development: Infancy 0-6, Childhood 6-12, Adolescence 12-18, and Maturity 18-24. The labels aren’t so much about physical appearance; they are about the radical changes on the inside as well as what—and especially how—children learn as they progress through each stage.

In the Infancy phase, children have what Montessori called the absorbent mind, as anyone would know by watching a child with a pile of dirt. This is a period of intense learning and discovery as they slowly become aware of themselves and their environment. How do they do this? Through seeing, touching, holding, and moving to name a few.

Maria Montessori considered ages 0-3 critically important, as she wrote "The studies which have been made of early infancy leave no room for doubt: the first two years are important for ever, because in that period, one passes from being nothing into being something." (San Remo Lectures, 1949)

In our Tadpoles class (ages 15 months – 2.5 years), we prepare the toddler’s environment with activities and Montessori materials that are engaging and that allow children to learn independently in a safe environment. Daily activities include group time, singing and dancing, and prayer as well as finger painting and other hands-on activities.

What about ages 3-6? This phase is no less important, as children develop the brain power, language and movement that propel them to learn exponentially. As Maria Montessori put it, "So, from the age of three till six, being able to now to tackle his environment deliberately and consciously, he begins a period of real constructiveness." (The Absorbent Mind, p. 152)

One of the most significant ways of channeling this constructiveness is through Practical Life, a key aspect of Montessori education. Not just by learning how to take care of themselves (such as personal hygiene), but also sweeping, dusting, making things tidy, setting the table for meals, waiting at the table, washing the dishes, etc.

We do all of these activities on a daily basis in the Butterfly class (ages 4-6) in addition to the hands-on Montessori materials. And they love it! It gives them a sense of accomplishment while reinforcing the concepts of order and organization.

Maybe someday my son will choose to grind my coffee for me at 6 a.m. on a weekday. LOL maybe not!

Next time we’ll take a closer look at the Childhood phase and how it fits between Infancy and Adolescence. 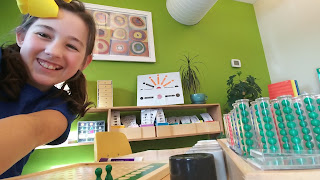